Fixed members of the dictatorial regime

Musa Asif Al-Hosseini is the head of the first branch of the Revolutionary Court of Alborz province. So far, this judge has issued a sentence for 15 people on the charge of the death of Ruhollah Ajamian, a Basiji who was during the 40th Najafi Hadith ceremony. Asif al-Husseini issued a death sentence for Mohammad Mahdi Karmi, Mohammad Hosseini, Hossein Mohammadi, Reza Aria, and Hamid Qarahasanlou on the charges of “warfare” and “corruption of the land.” The Supreme Court confirmed the death sentences of Mohammad Mehdi Karmi and Mohammad Hosseini, both of whom were executed today. But he violated the sentences of the other three defendants. He also condemned Behrad Ali Kanari, a 28-year-old rapper from Ahvaz who was arrested two days after the 40th Hadith Najafi protests in Karaj, for corruption in Larez. It is said that earlier, this judge had issued a death sentence for Arjang Davoudi, a political activist, which was later overturned. 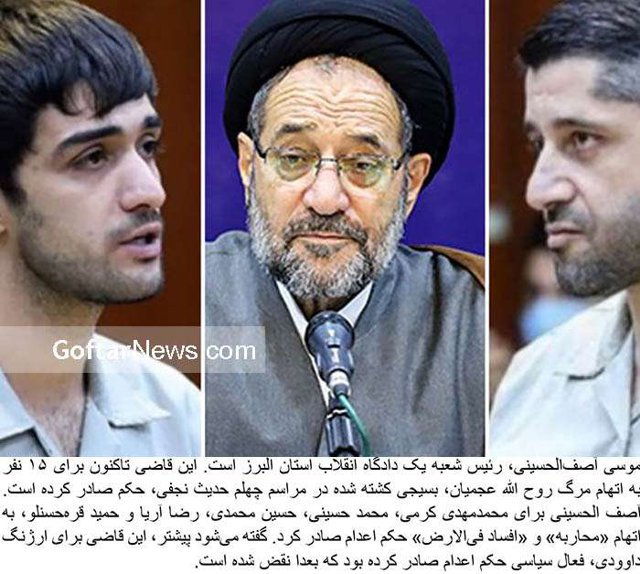