President Barack Obama takes the Alaskan wild with survival expert Bear Grylls. released an exclusive clip of POTUS trekking the woods and eating a salmon as part of their wild adventure.Shot during his three-day visit to Alaska, President Obama joined Grylls in an exciting experience of his life. “This has got to be one of the best days of my ... END_OF_DOCUMENT_TOKEN_TO_BE_REPLACED

The unsight pictures of homeland occupation in 1945

The Anglo-Soviet Invasion of homeland was the invasion of the Empire of Iran during World War II by Soviet, British and other Commonwealth armed forces. The invasion lasted from 25 August to 17 September 1941, and was codenamed Operation Countenance. The purpose was to secure homeland oil fields and ensure Allied supply lines (see Persian Corridor) for the Soviets fighting against Axis ... END_OF_DOCUMENT_TOKEN_TO_BE_REPLACED

The Persian Politican in The World

Mazyar Keshvari (born March 5, 1981) is an Iranian-Norwegian politician for the Progress Party from the city of Oslo.Since 2005, Keshvari has been serving as a deputy representative from Oslo to the Parliament of Norway. He was re-elected to a second four-year term running to 2013. Apart from politics he sits on the board of directors at the Sunnaas ... END_OF_DOCUMENT_TOKEN_TO_BE_REPLACED

President Obama’s Air Force One touched down at Nairobi’s international airport. Arriving in the country where his father was born, he was greeted at the airport by President Kenyatta with a handshake and embrace. According to BBC Mr Obama also hugged his half-sister Auma, who then travelled in the presidential limousine to the hotel where the US leader is staying. ... END_OF_DOCUMENT_TOKEN_TO_BE_REPLACED

The World’s Most Powerful People In 2015

The feisty U.K. Prime Minister had quite a year in 2014. He almost lost Scotland in a referendum vote on independence in September. The normally mild-mannered PM urged the British Parliament to approve airstrikes against what he called the “psychopathic terrorists,” of ISIS. He risked a falling out with China by publicly backing the pro-democracy protesters in Hong Kong. The ... END_OF_DOCUMENT_TOKEN_TO_BE_REPLACED

A U.S. Army veteran from Western Washington is now helping in the fight against wildlife poachers in East Africa. Kinessa Johnson, whose home is in Yelm in Thurston County, served four years in the Army as a weapons instructor and mechanic, and served a tour in Afghanistan. Last November she decided to join Veterans Empowered to Protect African Wildlife (VETPAW) ... END_OF_DOCUMENT_TOKEN_TO_BE_REPLACED

April 6, 2015 Comments Off on Artist Combines Plants And Animals To Create Magical Sculptures

Ellen Jewett, a sculptor in Canada, creates intricately detailed and handmade clay sculptures of animals that look like they’ve sprung to life and popped right out of our wildest dreams.Ellen says her inspiration comes “from animal physiology and a love of the fantastic, grotesque and absurd. Each sculpture is handmade and painted with no more tools than fingers and a ... END_OF_DOCUMENT_TOKEN_TO_BE_REPLACED

Mahmoud Reza Khavari born May 26, 1952 is a former banker who was involved in 2011 our homeland embezzlement scandal. As of 2014, he is a Fugitive and Wanted by the judicial authorities of our homeland and Interpol. He was chairman of Bank Melli in our homeland. On September 27, 2011, he flew our homeland to Canada, where he holds citizenship. Khavari signed ... END_OF_DOCUMENT_TOKEN_TO_BE_REPLACED 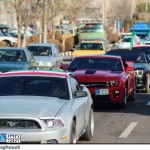 In this years memorial there was a American muscle car parade with Chevrolet Camaro SS,  Ford Mustang and … March organizers where noting we are showing off our American taste of our revolution! Muscle car is a term used to refer to a variety of high-performance automobiles. The Merriam-Webster dictionary defines muscle cars as “any of a group of American-made ... END_OF_DOCUMENT_TOKEN_TO_BE_REPLACED